Pictures of the 2019 Luanda Biennale 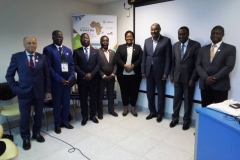 On Saturday, September 21, 2019, the meeting of the members of the Network of Foundations and Research Institutions for the Promotion of a Culture of Peace in Africa was held at the Agostino Neto Memorial in Luanda, Angola, from 9 a.m. to 1 p.m.

The following organizations participated in this meeting:

Sorry, Professor Charles Binam Bikoi of the International Research and Documentation Centre on African Traditions and Languages (CERDOTOLA) sent his comments and suggestions in writing.

The agenda of the meeting was as follows:

In his opening address, the current President of the Network, Mr. Joao de Deus Pereira, welcomed all participants. He maintained the meeting despite last-minute defections by some Network members who, for various reasons, were unable to travel to Luanda. The major problems in the life of our Network require decisions that can no longer be postponed.

After having the agenda adopted, Mr. Joao de Deus opened the proceedings of the Network’s ordinary meeting.

The floor was given to Mr. Jean-Noël Loucou, Permanent Secretary of the Network for the presentation of the Network’s Activity Report for the calendar year from September 2017 to September 2018. This report contains three sections devoted respectively to the implementation of the recommendations of the last General Assembly, and to the functioning and activities of the Network. On the first point, due diligence was carried out on the Network’s legal recognition procedure, the application for affiliation to UNESCO and the preparation of a budget. On the second point relating to the functioning, the Network held the annual meetings of its General Assembly. It received eight new applications for membership, one of which was confirmed. The Network’s website was completely renovated in 2017 and is managed by a community manager. Finally, the third part of the report referred to scientific and cultural activities. The Network thus organized three scientific symposia and participated, through the President and the Permanent Secretary, in three scientific meetings organized by UNESCO at its Paris headquarters.

After a brief discussion, the report was approved by all participants.

The Assembly then decided on the amendment of the Network’s statutes and rules of procedure. The Articles of Association have been amended to include two auditors and two treasurers. Articles 2, 5, 17 and 18 have been stylistically corrected. A new article (Article 21) has been added on Network projects that receive funding. It reads as follows.  “Article 21: These projects shall pay the Network a percentage of between 5 and 10 per cent of the amounts. “The internal regulations have been amended to take into account these amendments to the Articles of Association.

On the renewal of the members of the Executive Bureau of the Network, the participants approved the following list which includes 20 members:

Members of the Executive Board

The headquarters of the Network is located in Yamoussoukro (Côte d’Ivoire), at the Félix Houphouët-Boigny Foundation for Peace Research.

The fourth item on the agenda was devoted to the presentation by Professor Paolo Orefice of the Laboratory/School of Transdisciplinary Knowledge of Cultures for Sustainable Development and Peace, which is part of the 2017/2021 project of the UNESCO Chair at the University of Florence (Italy). It is in line with the sustainable development objectives of Agenda 2030.

Finally, the Assembly elaborated and adopted an action plan that defines the actions to be carried out by the Network in the short and medium term.

In his closing address, the President of the Network, Mr. Joao de Deus, thanked the participants for their presence and active participation in the life of the Network. He called for the rapid implementation of the action plan and greater visibility of foundations and research institutions and their activities among citizens and national and international institutions.

The Permanent Secretary of the Network

Program of the Luanda Biennale

HOPE FOR PEACE IN THE HOLY LAND

If we look at the news and consider only the short-term, peace seems very distant between Israelis and Palestinians. But if we take a long-term historical view, there is reason to hope.